Pumpkin Day!  What a fun end to a week filled of learning about pumpkins!  Luckily, I’m blessed to teach at a school where the parents are really involved and eager to help, and that made our Pumpkin Day run SO smoothly!!  I had 4 parent volunteers come in and each parent brought in a pumpkin, spoons, carving knives, a bowl, and paper towels.  We covered the tables with orange butcher paper and each parent took a group of 4 kids {which is why I got to walk around and take pics of our fun day!}  Each of the kids was given a Pumpkin Math & Science Booklet to complete and the parents did an AWESOME job of working with the kids!!
Here’s the investigation booklet we used for pumpkin day… 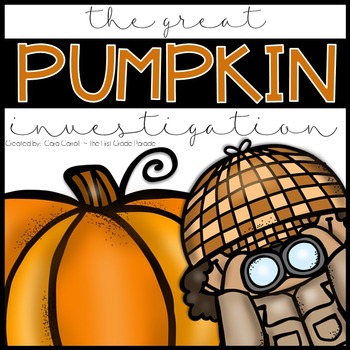 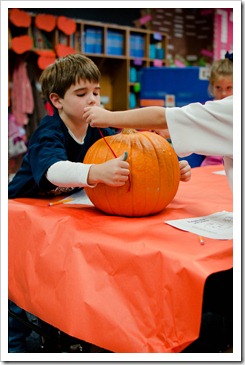 Next…estimating the lines on the pumpkin.  Once the kids made their estimates, the parents helped keep track of the counting. 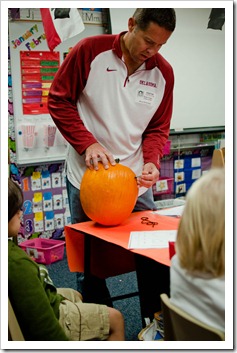 Time for a sink or float activity!  Most of the kids hypothesized that the pumpkin would sink.  Did you know they float?!  This was an awesome opportunity for the parents to talk about making a hypothesis and testing it to see if it was right!  The kids were FLOORED that their pumpkins floated!! 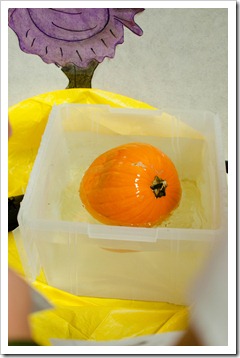 After the floating experiment, the kids got to use a scale to see how much their pumpkin weighed.  The parents had the kids weigh themselves also to see how their weight compared to the weight of a pumpkin.  I also heard a few groups talk about how many pumpkins it would take to equal their own weight… FUN! 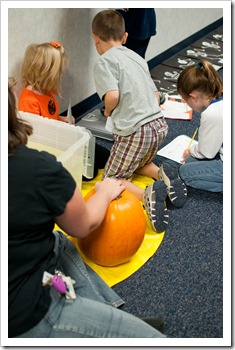 Finally it was time to estimate & count the number of seeds in their pumpkins.  This was their favorite part!  Each group carved open their pumpkin and spooned out the seeds.  The kids counted the seeds by groups of 10.  Some of them talked about skip counting by 2’s & 5’s but decided that it would be faster to count by 10’s.  Woo hoo! 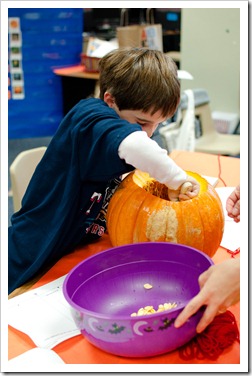 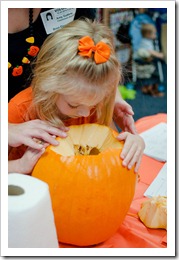 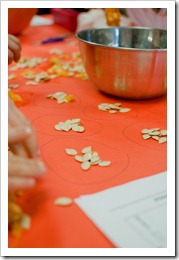 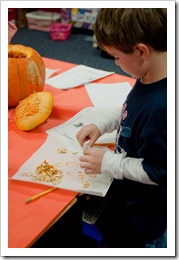 The kids circled each group of 10 to make counting easier.  The final counts were impressive!! 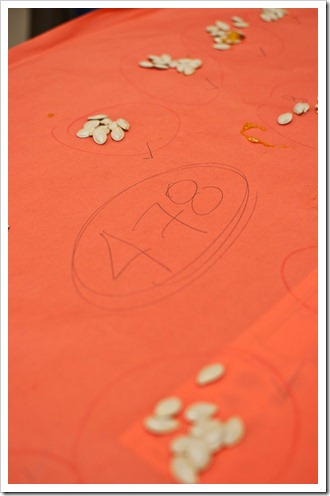 One of the sweet moms collected all the pumpkin seeds and took them home to roast.  Come Monday our class will be dining on roasted pumpkin seeds!  YUM!!!
Finally it was time to carve their pumpkins.  It was fun to see how different each group carved theirs…they all got to vote on what they wanted!!  And of course, the parents that brought in the pumpkins got to take theirs home for Halloween 🙂 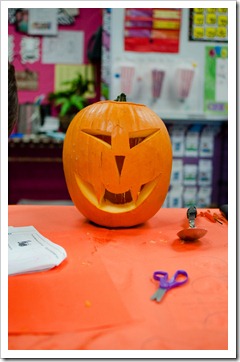 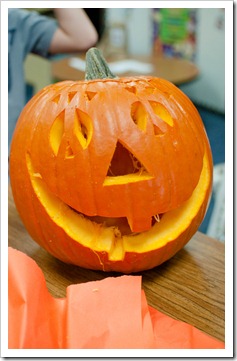 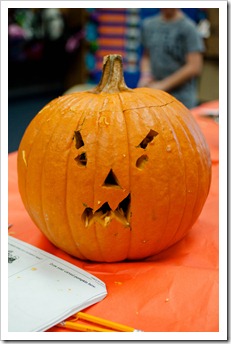 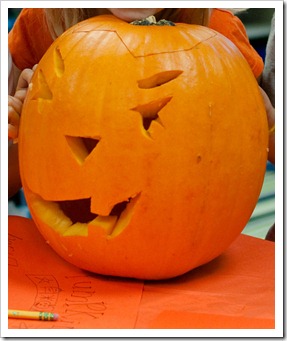 Such a fun way to end the week!!  And the kids learned so much!!!  I love Pumpkin Day!