I was blessed with a day to pull my kids one-on-one last week and assess each one individually.  We administer our literacy assessments at the beginning of the year and that includes sentence dictation, sight word recognition, oral word vocabulary {how many words can you write in 10 minutes?!}, letter/sound recognition, concepts about print, and DRA.  As I was administering the concepts about print portion of the assessment, I realized that a lot of my kids were struggling with differentiating between letters and words.  I understand that this is a skill that will develop over the next month{ish}…maybe longer…but I wanted to make sure that this was a skill I started to work on right away.  This is what I LOVE about data…it shows me EXACTLY what my kids need!! So…I called on a little help from my neighbor and she told me all about her “marshmallow spaces” activity.  I’ve always called our 2 finger spaces “meatball spaces” and the space between our letters are “spaghetti spaces”.  When I see kids that forget to add their spaces, I usually tell them that their writing looks like alphabet soup and Mrs. Carroll does NOT like alphabet soup!  But the idea of marshmallow spaces had me intrigued. As soon as I pulled out the bag, the kids were hooked.  I started by writing a jumbled up, alphabet soup sentence on my chart paper.  And just incase your eyes are deceiving you, that does say “I can see the PENCIL.” 🙂 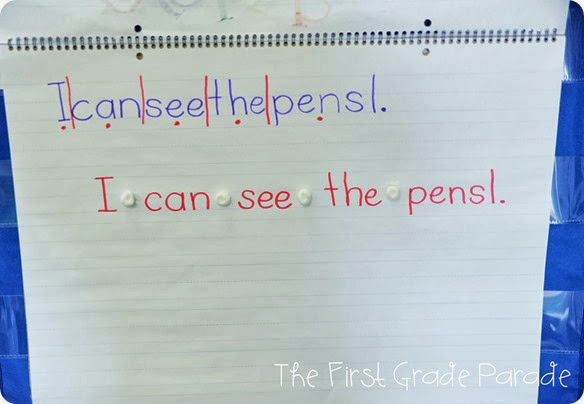 I told the kids what the sentence was supposed to say and then told them we needed to find the WORDS inside the sentence.  I know this seems like a stretch given that this is only the 4th week of school, but they are definitely ready.  Once we found our words… most of which are the sight words we’ve learned over the last 3 weeks…we separated them with red lines.  Then I told the kids that EVERY sentence needs marshmallow spaces so you can see where one word stops and another word starts.  Of course, I had to use real marshmallows to get my point across 🙂 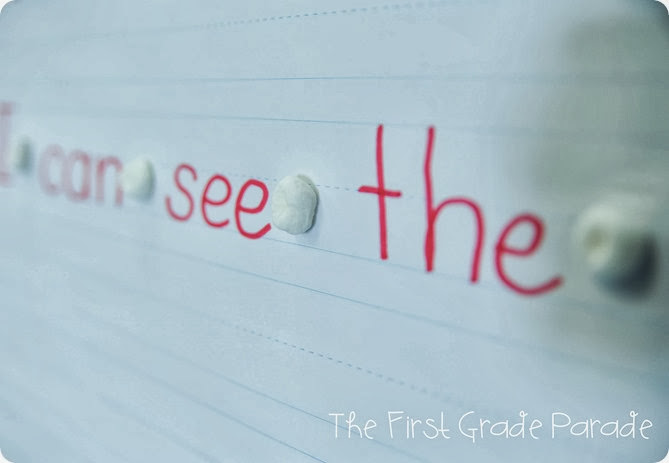 This was a great way to show the difference between a word and a letter.  We counted all the letters in our jumbled up, alphabet soup sentence and then counted all the words in our marshmallow spaces sentence.  I loved that the kids were able to connect with this visual!  After our little mini lesson, I sent the kids back to their desks and we did a little guided writing together.  We worked with our two sight words {my & is} and two simple CVC words {cat & fat}.  I told the kids that they had to write the sentence and put marshmallows in between the words…show me where one word stops and another word starts.  They were more than happy to oblige {and nibble on their spaces, too ;)} 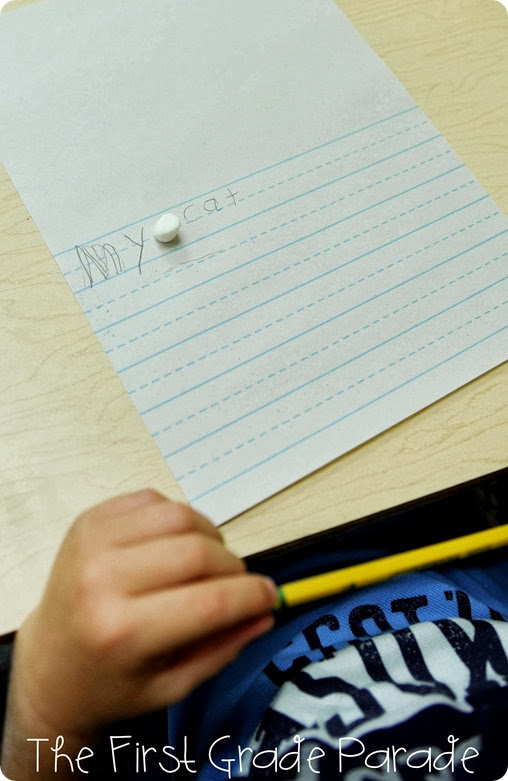 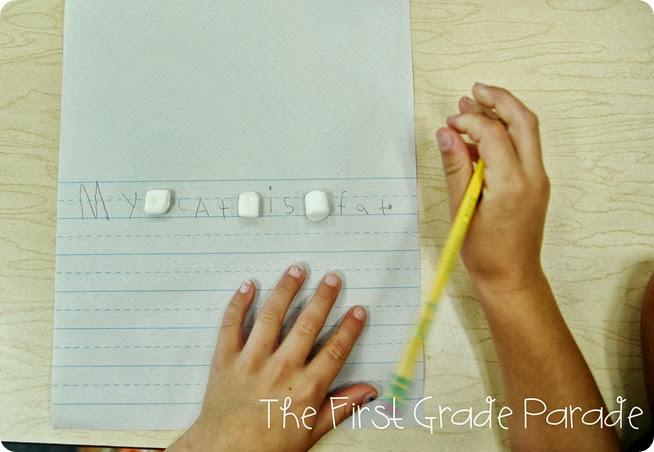 As I walked around, I had the kids tell me about what they did & why they placed their marshmallows where they did.  Then they read their sentences back to me and counted the number of words in the sentence, too. 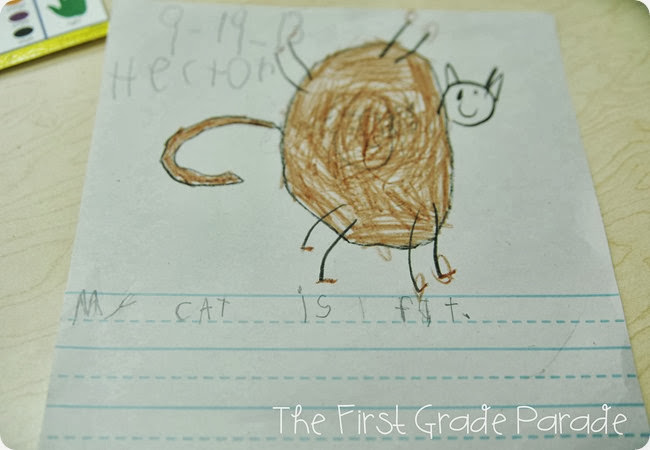 Of course, they got to eat their marshmallows when they were finished!  Their marshmallows were pretty yucky by the time it was all said and done, so we had to replenish the old with the new…plus one to grow on :)  We will definitely be revisiting this activity often.  Not only is it great for getting them to see the difference between a letter and a word, but it’s great for making them aware of their spacing!  That’s always hard for them to understand when they’re beginning to write.  Now without further ado, the winners of my Apple Antics & Apple Babies packets.  But first let me just say that I LOVE apple…ANY and EVERYthing apple!!!!  Honeycrisp are, hands down, the best apples.  Apple pies, turnovers, dumplings, crumbles, muffins, pancakes…you name it…it’s ALL good.  And let’s not forget about my beloved Caramel Apple Starbuck’s concoction.  AMAZING.  And from the sounds of it, it sounds like I need to try an Appletini now :)  All I can say is TGIF!!  HA! The winners are… Karen {Mrs. Jones Kindergarten} Mrs. Banister youngPreKteacher email me at thefirstgradeparade@gmail.com so I can send you your goodies!

Previous Post: « Math Stations, A Great Idea, & Something New
Next Post: The Week in Rewind, A Peek At My Week, and Fall is Here! »

It feels like a lifetime ago that annual pumpkin p

Anybody else adore this book as much as I do?! The

This week is gonna to be great...I can just feel i

I caught a glimpse of the lettering on my socks as

Remember that line in Home Alone when Kevin said,